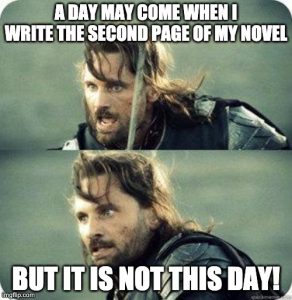 Fiction authors have been romanticized in popular culture for so long, the average person likely thinks we sit around all day waiting for inspiration, only to zip over to an old-school typewriter when our muse strikes, banging out a novel in a mad, all-night writing spree.

The truth is much more mundane. You have to write every day, even when you don’t feel like it. You work regular hours, and you sit at your desk and hammer out story after story, doubting whether each one is any good. You revise and you polish, and then you release it into the world, hoping like hell readers enjoy the damned thing.

It ain’t sexy, but there it is. And it is work.

The Real Challenge is in Finishing

Being an author isn’t a physically demanding job, but it is routinely difficult. That is to say, it beats digging ditches by a mile, but that doesn’t mean the work is easy.

Writing a novel is a process that often feels like running a marathon. Real writers, like all real runners, never have a problem starting the race—it’s finishing the damned thing that separates the wheat from the chaff.

Some of us get slogged down in the middle, and some of us have trouble breaking the tape.

It is an age-old problem for writers of all kinds, but most especially for novelists, simply because the novel is the longest form of prose one will ever write. And, therefore it is inherently one of the more difficult forms of prose for writers to finish.

For many writers, the plot outline is the thing that saves them from becoming that sad cliché—the aspiring novelist who cannot finish a novel to save their life. I’m no different, as I spent years attempting to write and finish my first novel, only to meet with failure after failure.

Admittedly, those failures happened because I lacked two things; a basic knowledge of story structure, and a writer’s discipline. The first is relatively easy to acquire, and once I had it I was off to the races. As for the second, it’s something a writer has to develop over time, and how to develop it is not the topic of this post (but the short answer is, sit down and write, daily).

If you want to be a commercial novelist—someone who sells enough books to write as a full-time profession—you need to understand the fundamental elements of story. Then, of course, you must include those elements in your novel, doing so in such a way that entertains and enthralls the reader.

I know this seems obvious, but you’d be surprised by the number of aspiring authors who miss this simple truth. I certainly did, when I set out to write my first novel. Anyone can write a novel, right? That’s what most people believe, and as for me, I’d already written a half-dozen non-fiction books…  so how hard could it be to write a work of fiction of equal length?

Two years (give or take), five or six failed attempts, and many tens of thousands of typewritten words later, and I discovered it’s pretty flippin’ difficult. Then I learned how to plot, and while plotting didn’t make the job easy, it did make it a hell of a lot more do-able.

“Outlines are the last resource of bad fiction writers who wish to God they were writing masters’ theses.”
—Stephen King

Here we have two highly successful and prolific commercial authors, each with their own opinion on the value of outlining a novel. So which one is right?

The answer is, it depends on the writer. Some authors (so-called “pantsers”) can sit down and start writing a novel, crafting it with a recognizable beginning, middle, and end, without ever committing a single word to an outline before embarking on the task.

Other authors (plotters) must meticulously plan out every scene and story beat, line by line, to ensure we finish the exercise with something that at least remotely resembles a coherent story. And there’s nothing wrong with either approach.

Me? I fall somewhere in the middle. While I know of authors who write 50 to 80-page outlines for each novel they write, mine are usually four or five pages. That’s just enough to delineate the major story beats and to give me a direction in which to take the novel as I go.

I tend to use the hero’s journey as a structure guide for my novels, as most are thrillers at their core. This means the major story beats in my novels are usually very, very similar from novel to novel. This, in turn, makes them somewhat predictable.

Alas, a certain amount of predictability will always be present when an author writes genre fiction, especially series fiction. That’s because the audience has specific expectations about what the story should provide, and failing to deliver on those expectations will result in sequels that no one wants to read.

That said, my hero often ends up doing things I never planned for him to do, and never expected him to do, until the moment the idea sparked in my mind and ended up on the page. This is not something I consciously do—it simply happens in the natural course of my writing process.

Personally, I think this keeps my stories from becoming too damned predictable, because curveballs can and do happen every time I write a new novel. And while as a genre fiction author I am in the business of delivering the familiar, I am also in the business of doing so in unique and interesting ways.

That’s why I’m a dedicated plotser, and likely always will be. The outline gives me just enough structure to satisfy my left-brain tendencies. Yet, allowing myself the freedom to diverge from my outline feeds my creative side.

That’s the process that works for me. Will it work for you? Who knows? The only way to tell is to start writing that novel.