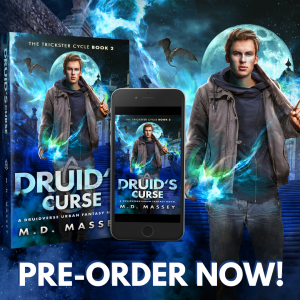 That’s right, Druid’s Curse drops on September 24th. This is the second novel in my Trickster Cycle series and the fourteenth Colin McCool novel to date. So, what can you expect from this latest entry in Colin’s saga?

For starters, this book is a return to some of the madcap antics from previous novels that readers seemed to love. Druid Master and Druid’s Folly were pretty dark, so I wanted to lighten the mood a bit and remind people that Colin is still a major goofball and perpetual crap magnet.

As well, this novel is a kind of bromance, buddy cop story featuring the original Druidverse odd couple, Colin and Crowley. I’ve been wanting to write that kind of novel for some time, both to further establish Crowley as a primary character in the shared universe, and to exploit the obvious personality differences between them.

Yes, I know that fans requested a team-up with Loki in this novel, but after playing around with that idea I realized very quickly that such a story would be problematic. Having Loki by Colin’s side would mean he would have a god’s help over the course of an entire novel, leaving way too much opportunity for deus ex machina to occur. I do have a team-up planned for those knuckleheads, but it’ll likely be written in the next short story collection or as a novella.

As for the people you’ll meet in this story, you’ll spend time with several established characters, and you’ll meet a few new ones as well. The antagonist in this novel is someone we haven’t met yet, but having this person come after Colin makes perfect sense, considering the events of the previous two novels.

Admittedly, this book covers some familiar territory, as we’ve been to Underhill before with these characters. However, this is an Underhill in chaos that is being ravaged by a full-scale invasion and civil war. By the end of this novel, you may very well see Tír na nÓg in a whole new light.

Now, for those readers who have been saying, “This is The Trickster Cycle… where are all the tricksters?”—I ask you to be patient because I have plenty of cameos planned in the next novel for members of The Trickster’s Local #113.

Regarding Druid’s Bane, the third book in this series, readers can expect plenty of hijinks, some trippy, completely new settings that you haven’t seen before, and lots of trickster antics.

Since I know readers will be asking when the next book is coming out (thanks, BTW—I appreciate your enthusiasm), here’s what I have planned for the rest of the year:

That’s all the news I have for now, folks. Please be sure to pre-order Druid’s Curse at this link.

Thanks for your support!