Eh, not much. I’ve been doing so much writing and editing, the last thing I want to do at the end of the day is look at a page.

Well, I take that back. I have been slowly working my way through the first Burke novel, with intentions of reading the entire series again. But, I’m basically just reading a paragraph here and there at odd intervals a couple of times a day (like when I’m in the car wash, or waiting for my kid at the bus stop).

That said, I’m taking plenty of time off in July, and I plan to catch up on my TBR list with Smoke Bitten by Patricia Briggs and Bloodlines by Larry Correia.

I wanted some mindless entertainment, something I could zone out to after a long day in the word mines. After blasting through every episode of Rick and Morty, thankfully I stumbled across The Mentalist on Amazon Prime.

The show is hilarious, and Simon Baker does an outstanding job portraying a genius former con man with a tragic past who solves murder mysteries for the California Bureau of Honestly Who Gives a Shit Because Van Pelt.

About every third episode is a masterclass in how to plot a murder mystery. While it’s often apparent whodunit, it’s still fun watching Thomas Jane run circles around everyone while acting like a MENSA wunderkind with ADHD. With something like eight seasons and twenty-ish episodes per season, it should keep me occupied for quite a while.

A while back the trailer for Sons of the Forest showed up in my YouTube feed:

I watched it, and I was like, “That looks mental… more, please!” Then I found out SotF is a sequel to the original game. Next thing you know I was on Day 76 of my survival on the peninsula.

The Forest is available in the Playstation store and on Steam. Strictly speaking it’s a survival horror game, but if I had to describe it I’d say it’s Minecraft for adults, but with cannibals and mutants trying to kill you instead of zombies and endermen.

Of course, last week Mass Effect: Legendary Edition dropped, so I took a break from playing The Forest to give Mass Effect 2 another whirl. Oh, how I missed you, Jack. 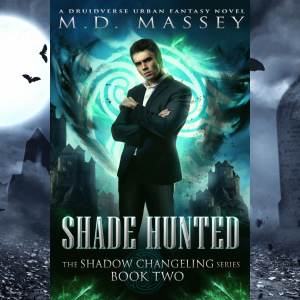 I just wrapped up the manuscript for Shade Hunted, and currently it’s with my editor. This is the second book in The Shadow Changeling Series, which follows the adventures of the wizard Crowley, everyone’s favorite urbane antihero.

In this second installment, our hero is learning a lot more about his family and his life before he became a changeling prince in Underhill. This novel has plenty of action, lots of Belladonna, and of course it’s rife with Crowley’s biting wit and superior attitude regarding, well, just about everything.

Shade Hunted is currently available for pre-order, and the book drops on May 28th.