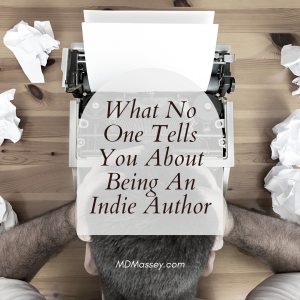 Before We Begin, A Disclaimer…

Before I delve into this topic, I’d like to start with a caveat or two. First, these are my own opinions, based on personal experience and observation. Do not treat these opinions as the gospel truth, because YMMV.

Second, I am not bitching about being a successful indie author. Honestly, it’s my dream career, and it sure beats the hell out of digging ditches.

That said, it’s not all sunshine and unicorn farts—far from it. Since I’m frequently contacted by aspiring authors who are looking for advice on self-publishing, I’d like to share a bit about the dark side of being an indie author.

Being an indie author requires a lot more work than you might think. Essentially you’re running a small publishing company, and like any small business, there’s always something to do. If I’m not writing or editing, I’m working on marketing, or coordinating with the numerous service providers who help me produce a professional product.

As anyone who has ever run a small business knows, there’s the primary work (the thing you do) and then there’s the admin work (the stuff you have to do to make the thing you do possible). Typically, the primary work and the admin work are both full-time jobs. For example, when I was running martial art schools, for every hour I spent on the floor teaching I spent twice that off the floor running the business.

The indie publishing biz is no different. Writing is a full-time job, and so is the admin work that’s required to make an indie author successful. Although I’ve worked harder in my previous careers since I began writing full-time I frequently work long hours and I rarely take an entire day off.

That’s simply the nature of the beast. If you think you’re going to become a successful indie author by writing an hour a day and then f*cking away the rest of your time, you’re sadly mistaken.

Some People Won’t Respect You

But tell them you’re an indie author, and they’ll say, “So you self-publish? Meh.”

Writing is the only creative profession in which independents are seen as “less than,” and certain types of people like to thumb their noses at us. These are mostly academics, frustrated MFAs, and trad-pubbed authors making a lot less money than the typical full-time indie author.

This attitude is, of course, patently ridiculous. No one looks down on an indie musician or an “indie” painter or sculptor (because virtually all painters and sculptors are indies, natch). For artists in other fields, their worth is for the most part founded on consumer appreciation; namely, how well their work sells.

Yet, you can be a bestselling indie author and still get sneered at by ivory tower types. Me? I could give a rat’s ass what a random academic thinks of me, but the lack of respect bothers some indies I know.

If you’re going to go indie, just accept it and ignore the jeers and sarcastic remarks. Chances are good you’ll be much more successful and profitable as an indie. So long as your readers are happy, who gives a shit what other people think of how you choose to sell your work?

You Eat What You Kill

In this business, income maintenance is highly dependent on consistently turning out new books. In fact, most of the full-time indie authors I know write and publish at least three to four novels a year.

Consistency is the key. Readers expect their favorite authors to produce a certain amount of new content regularly. Expectations are set early in an author’s career by the pace they establish while gaining a readership, and readers become accustomed to that pace.

When authors fail to produce said content in the established timeframe, readers don’t get antsy, they become forgetful. That’s because they want to be entertained, and rightly so. Therefore, if you’re not providing them with entertainment, they will move on to other authors who are producing content more frequently.

As well, the Amazon algorithms are designed to promote new content. For the first thirty days or so after an indie author drops a book on the Kindle platform, the algos seemingly pull out the stops, announcing that book to readers and pushing it out to all and sundry.

However, the honeymoon never lasts. Soon the algorithms move on, and all that glorious free promotion and attention is showered on other, newer novels. To maintain consistent royalties, indie authors have to crank out new books regularly to keep their sales up and to keep the algorithms happy.

That’s what we call the Amazon hamster wheel. Again, it beats digging ditches, but be aware that if you don’t regularly turn out new novels, your royalties will eventually dwindle considerably. Those authors who have excellent marketing skills can forestall that effect, but not forever.

This is certainly something to consider if you intend to become an indie author.

For Top Pay, Speed Is A Requirement

This business rewards speed. As an indie author, you’re always trying to balance the speed of iteration vs. feeding the artistic side that made you want to become a writer in the first place.

Of course, there’s that age-old argument about speed vs. quality when it comes to writing novels. One side says that speed kills quality, and they’ll swear up and down that you can’t write a decent novel in X days or weeks.

On the other hand, the other side says speed has no impact on quality. They’ll say they do their best work when writing at warp speed, and swear that slowing down does nothing to improve the quality of their output.

Moreover, history has taught us that even in traditional publishing, many successful writers work at light speed.

For example, Jack Kerouac wrote On The Road in three weeks. Stephen King wrote The Running Man in a week. And get this—John Boyne wrote the first draft for The Boy in the Striped Pyjamas in just two-and-a-half days.

So which side is right? The answer is, it depends.

Some authors produce quality work by writing quickly, and others do their best work at a snail’s pace. Neither approach is inherently superior to the other. But in today’s indie publishing environment, authors who write fast and publish often tend to earn more than their peers who do not.

And here we come to the topic that every wannabe book reviewer and frustrated MFA loves to harp on, that being how indie novels are rife with typos, grammatical errors, homophones, and misspellings.

Well, here’s a news flash. The more you write, the more typos you produce—it is a given. And, because the ‘Zon’s algorithms reward authors for publishing frequently, in indie publishing editing is often a “good enough” process.

That doesn’t mean indie authors don’t edit; far from it. Nobody stays on top in this business for long by putting out sloppy work.

For example, my manuscripts always get at least three editorial passes. I edit during the revision process, then I send my manuscripts to a professional editor. She does two passes, sends it back to me, I approve and revise based on her suggestions, and then she does another pass.

Then I feed it to my beta readers (who are awesome), and they find another half-dozen errors that we missed. I fix those, then it’s off to publication.

And yet, errors still slip through somehow. Which is why…

I get emails and DMs about typos from well-meaning readers on an almost weekly basis. And guess what? I welcome that feedback, because 1) it’s free editing, and 2) readers who want to help are the best.

Sure, occasionally I’ll receive a message from someone who is just nasty in their criticism. They’ll piss and gripe about how I made a “simple mistake” that’s inexcusable, blah, blah, blah. Typically in those cases, I nod and thank them for their feedback, then I get back to writing.

The fact is, writing 2,000 words is a slow day for me. Normally I spend a couple of weeks with the first half of a novel, taking my time and letting the story develop as I go. But once the story gains momentum, I might write the second half of a novel in a week or less.

That means I’m writing 5,000 to 10,000 words a day. When you’re producing that many words, mistakes will be made. Editing as you go slows down the process, so usually I’ll write a scene, run it through a quick spell check, correct the errors, and immediately move on to the next scene.

And as I said before, mistakes slip through the editing process. I used to freak over it when it happened, but now I see it as an unavoidable part of the process. And thank goodness we live in a digital age, at a time when I can edit a manuscript with a few keystrokes, then click a button to upload the revised version to the various publishing channels that sell my books.

As I said in the opening paragraph, being an indie author isn’t all rainbows and unicorn flatulence, but it’s not awful, either. Being an author was a lifelong goal of mine, something I dreamed about when I was a young, nerdy kid who regularly checked out stacks of books from my local library.

While I was reading Homer, Tolkien, Asimov, Bradbury, and King, I thought that maybe someday, if the stars aligned, I might write some fiction that others would enjoy. And if I was fortunate enough—or blessed, depending on your perspective—perhaps I’d be able to write as a profession.

Surprise, surprise, I did it. It took ten years of practice and a digital drawer full of unfinished manuscripts before I published my first novel, but I achieved that goal. And after keeping at it for a few more years, I developed a readership and I was able to go full-time.

Honestly, there is nothing more satisfying than publishing a novel and getting positive feedback from my loyal readers. It tickles me pink every time someone tells me that my books helped see them through a difficult time, or entertained them during long lonely hours on the road or at work, or brought them closer to a loved one through a shared interest in my stories and characters.

And while it very often takes a great deal of work and quite a lot of worry and stress to turn out a decent novel, the process can also be a lot of fun. Doing research, creating fresh challenges for old characters, coming up with ideas for new settings and foibles—it’s all a hell of a lot of fun if you allow yourself to enjoy it.

Despite the negative aspects of being an indie author, it’s a damned fine way to pay the bills. If I have my way I’ll be entertaining my readers by writing and self-publishing novels for years to come.