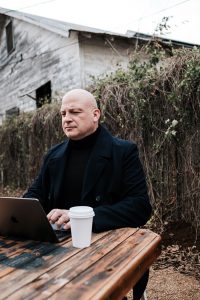 I like to write in empty fields and abandoned buildings, so people don’t interrupt me with stupid questions.

Every author has heard this line at least once:

“I’ve got this great idea for a book.”

Whenever we hear those words, we paste on a polite smile while slowly dying inside, because we know what’s coming next.

“And if I could just find someone to write it, it’d be a guaranteed bestseller.”

Um, no. If ideas and concepts were what made books sell, then Make Your Own Sex Toys should’ve hit the New York Times bestseller list. (Seriously, that’s a real book. Check Amazon if you don’t believe me.)

Like I’ve said before, ideas are easy to come by—it’s turning them into compelling fiction that’s the hard part. But why is that?

Well, it’s because writing a story that readers will enjoy is a lot more complicated than just stringing words and sentences together until you finish a book. That’s why most working authors have a digital drawer full of unfinished works in progress (or WiPs, as they are commonly referred to in the publishing industry).

In fact, I have at least four or five unfinished novels sitting around on a hard drive somewhere, all in various states of completion. As I recall, when I first started writing fiction I was very good at starting novels, but I could never seem to finish one.

This frustrated me to no end because I had already written and published several nonfiction titles. I even remember thinking, “If I can write a full-length nonfiction book, why can’t I finish a novel?”

The answer to that question would elude me for years, and I continued to fail miserably at writing fiction until I started studying the craft in earnest (not that craft—the other craft, the one that has to do with crafting compelling fiction). I took college courses and online classes, I read books and articles, I watched seminars on YouTube, and then I practiced by writing almost every day.

At first, I could only manage a few hundred words per day. But the more I practiced, the easier it became, and soon I found I could quickly jot down 1,000 words or more in a sitting. Finally, after many attempts and years spent studying the craft, I finished my first novel in 2012.

Of course, at the time I didn’t know it sucked. I had no idea that the prose was elementary, the pacing uneven, the characters flat, and the dialogue, unrealistic.

I mean, come on—I went through the trouble of hiring a “professional” editor, didn’t I? And I slaved over that thing for months. In my mind at least, the book should’ve been a masterpiece.

Yet, it wasn’t. Hell, it wasn’t even fun to read. Well, I take that back—it was a YA novel, and some kids did read it, and they gave me favorable reviews way back when.

But after I had a few more books under my belt, I realized that my first novel wasn’t exactly the greatest thing since sliced bread. That’s when I took it off the market and gave it a serious working over. Then I hired a much more experienced editor to help me whip it into shape.

(Incidentally, I later re-released that book as Druid Blood. While it’s not my best work, it does get reasonably decent reviews from readers.)

The moral of this story is that I wrote four or five unfinished novels, and I completed three books before I was able to recognize that my first novel was shit. I probably wrote 500,000 words before I learned to fix my own work and make it at least halfway readable.

Oh sure, I was a voracious reader, and I knew what I liked and didn’t like in a fiction novel. But translating my personal preferences into a writing process, well—that was another matter entirely. It wasn’t until I learned about story structure, pacing, crafting readable sentences, active setting, characterization, and all those other things that go into writing compelling fiction that I started selling novels.

It wasn’t my concepts and ideas that did it. Hell, it wasn’t even Facebook ads, because those weren’t a thing back then. Nope, it was studying and practicing the craft of storytelling.

And, that explains why most people will never turn their ideas into novels. It takes time and effort to learn how to craft a story that sucks people in and keeps them reading until the very last page. Put simply, writing fiction is harder than people think.

So, if you’re an aspiring author, here’s my advice: Write through the suck. More often than not, practice and experience are what separates working authors from wannabes. Or as other authors have often said, “Writers write.”