I know it’s been a while since I posted an update to the blog… mea culpa, mea culpa. I honestly don’t like writing blog posts, mainly because I try to save my writing juice for penning novels these days. But since readers often visit author websites for info on their latest releases and so on, I figured I’d better damn well post some news.

So what have I been up to lately? Mostly, a whole lot of writing. 2017 was a busy year for me, because in late 2016 I decided to stop teaching Krav Maga in order to focus on producing novels. I was only teaching part-time, but when I factored in travel time, marketing, admin work, and so on, it added up to a large chunk of my workweek that I could’ve been spending at my writing desk. It was a tough decision, but it turned out to be the right call.

To give you an idea of how much my work output has increased since I decided to focus on writing fiction, from the summer of 2014 to the summer of 2016 I wrote and published five novels, including the first four books in the Scratch Sullivan series and the original Colin McCool novel. Yet, since the fall of 2016 I’ve written and published four novels, a novella, and a novella-length short story collection. 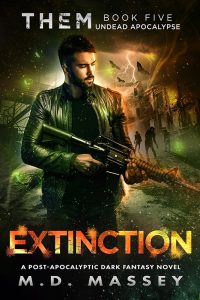 And, I’m about to release my sixth book of 2017, Extinction: Undead Apocalypse, which is the fifth and final novel in the Scratch Sullivan post-apocalyptic saga. At the time I’m writing this blog post, the manuscript is with my editor and I expect to have it back by week’s end, which means I should have the ebook ready to publish by the 20th.

Unfortunately, in order to have a pre-order page for the ebook Amazon requires authors to finalize their work four days prior to the book’s launch day. So, the novel won’t be released until Christmas Eve. But by all means, feel free to click on the cover image or the link above to pre-order it at the introductory price of 0.99 cents.

And Colin McCool readers need not worry, because I’ll be working on Druid Justice over the holidays. Technically I’ll be on vacation, but that just means I can write without a lot of added pressure from my “day job” responsibilities.

A Few End of Year Reflections On Writing…

Speaking of which, some people have asked how I managed to write so many books this year, considering that writing isn’t all I do. Honestly, it’s because I am at my writing desk at 9 am every weekday morning, and I don’t believe in writer’s block. I make my characters do what I want, and when it’s time to write, I write… even if it’s drivel. As long as I hit my word count goal, I know I can fix it in the editing and revision stage; the main thing is to just get the words down on the screen.

Four years ago, I never would have guessed that I’d be a full-time writer today. I’d spent years studying the craft, reading books and taking writing courses, and yet my first novel was crap when I published it. But I kept writing, I listened to feedback from my editors and readers, and I worked on improving my writing and storytelling skills.

So here’s some advice to those of you who dream of pursuing writing as a career: Develop a daily writing habit and stick with it, because it will pay off.

Other News and Miscellany

And among other news that’s not book-related, we actually got some snow in Austin this year:

Having spent most of my childhood in the Midwest, I know that a few inches of snow isn’t a big deal to those of you who live in colder climates. However, the last time we saw a significant accumulation of snow in this area was at least twenty years ago. Sadly, the snow had all melted by noon of the next day, but it was beautiful while it lasted. 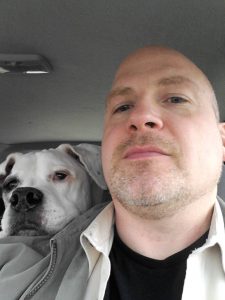 And for those of you who actually pay attention to what’s in my bio, my beloved bulldog Maggie died earlier this year. If you wondered why Moonlight Druid was so dark, that probably had a lot to do with it. She’d developed cancer and was suffering quite a bit, so I decided it was time to have her put to sleep. Losing Maggie put me in a funk for months, and I still find myself looking for her around the house. *Sigh*

Despite that sad bit of news, overall it has been a good year in the Massey household. I feel very blessed to be doing something I love and to be living out one of my childhood dreams. And, I am exceptionally thankful for all the readers who have supported my work over the last few years. So thank you, because you’re the reason I’m still writing.

Of course I’ll be writing the next tetralogy in the Colin McCool series, and I’m considering a spin-off series featuring some of the characters from those novels. Here’s to looking forward to 2018 and the release of many new novels in the McCool-verse. Merry Christmas & Happy Holidays!