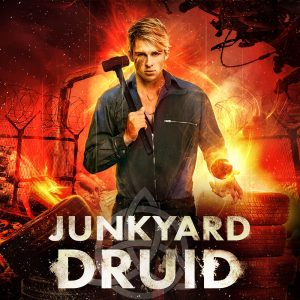 The main character in my urban fantasy series, Colin McCool, a.k.a. the Junkyard Druid.

Nope, not Adam Yauch (RIP MCA), nor MC Lyte, and certainly not MC Hammer. Today, my friend, we’re talking about main characters—how to create one that appeals to readers, and also avoiding common pitfalls that plague first-time authors.

So how do you create a main character that readers will like? That’s a good question and one that authors have been asking for generations. Write an MC wrong, and readers will drop your book like a hot rock. But do it properly, and you’ll suck your readers in and have them begging for more.

I’m a big fan of formulae because you have to know the rules before you can break them. And IMO, all memorable main characters possess the following three qualities or traits.

A Well-Written Protagonist Is Relatable

A good main character is relatable, in that the reader can find something within that character’s personal make-up with which they can identify.

For my money, this trait is perhaps the most crucial of all. If the main character turns the reader off from the very first page, they’ll set that book down and move on to the next title on their TBR list.

But if they can identify with the MC, that’s the first step to sucking them into your story. The trick, however, is in creating a likable character without making them perfect.

So how do you accomplish this?

For starters, your story’s hero must not be a prick. Or, if they are a prick, then they must be a likable prick. Meaning, they have some redeeming quality that causes the reader to like the MC, despite their misgivings.

A common trick in screenwriting is to have your character do something heroic or praiseworthy in the first few pages of the story. This is the so-called “save the cat” moment (and if you get a chance, go read Jessica Brody’s excellent novelist’s adaptation of the original, eponymous work).

Another way to go about this is to show the protagonist struggling with universal human problems. And then, to show them dealing with said problems in unique, humorous, or admirable ways.

This technique isn’t as powerful as the “save the cat” moment. However, it will go a long way toward instilling the second crucial trait in your MC, avoiding a very common mistake newbie authors often make.

All Great Main Characters Are Believable

Great MC’s are believable in that they are not OP Mary Sues or Marty Stus, who are immediately able to wreck anyone and anything that gets in their way. Such characters might serve as adequate wish-fulfillment on the part of an author, but they do little to get a reader invested in their plight.

I’m sure you’ve read novels where the main character is terribly overpowered. The problem with this is that by the time the reader gets to the second act (at which point the MC will first be tested against the forces of evil), there’s no suspense because the reader knows the MC is in little peril.

Certainly, it’s okay (and even advisable) for the protagonist to earn, learn, or otherwise gain great power over the course of a novel, or several novels if you’re writing a series. But creating an MC that is virtually invincible from the get-go is a great way to bore the hell out of your reader.

This is one of the things that absolutely killed the Luke Cage television series. Of course, Luke is a very powerful superhero, and as he was portrayed in the original comics, he’s a fun and interesting character.

But based on the threats he faced in the Netflix series, the viewer was never really given cause to worry about his wellbeing. And thus, the viewer was given little reason to invest in that character’s journey.

It’s a rookie mistake, and one you should avoid if you ever write a fiction novel or screenplay. Boring MCs are the kiss of death for fiction novels. Which brings me to the third trait all good main characters possess…

Every Memorable Protagonist Is Unique In Some Way

A well-written main character will possess some quality or combination of qualities that makes her unique from other, supporting characters. Typically, the main character also possesses some talent or skill that is pivotal to their later triumph over the FoE. But be careful—it’s very easy to undermine a character’s believability factor while showing them to be a standout.

In times past it was common for fiction authors to make their MC “the chosen one,” which is basically an easy way of telling the reader the MC is special. Unfortunately, that trope has been used so many times that it has become clichéd. Authors still use it as a characterization device, but it’s seen by many as the mark of a rookie fiction author, and generally something to be avoided.

Instead, a better way to show that your character is unique is to do so with indirect, implicit characterization. For example, by placing them in difficult situations or circumstances and then showing the character dealing with said challenges in a noteworthy manner.

Such displays are much more effective than simply telling the reader the MC is special. Direct, explicit characterization can be useful, but it’s best done by supporting characters rather than the MC.

If the MC says they’re special, it might sound like boasting to the reader. And unless your MC is supposed to be a blowhard, it’s probably not the best approach to establishing what sets them apart from the crowd.

So, if you’re going to tell the reader directly about what sets your MC apart, use a supporting character to do so. And preferably, one that is in a position of authority. Even better, make their endorsement a grudging admission, because it’ll make their approval seem that much more genuine.

Of course, there’s much more that goes into writing a compelling main character. One of those elements is the world they live in and the challenges that world presents… and that’s a topic I’ll tackle in a future post.