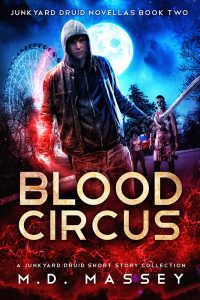 Welcome to the Mid-December update from The World Beneath! I have a ton of writing to do before this weekend, so let’s jump right in…

A couple of things, actually. For one, the audiobook for Blood Circus was released last week. And, Blood Scent and Blood Circus are (finally) available in paperback format.

Also, I’m working hard on Book 8 in the Colin McCool series, in the hopes I can finish it by the end of the year. No promises, but that’s my current plan.

Now, onto a topic that came up earlier today… how to deal with criticism as a writer.

How Writers Should Deal With Criticism

This morning I came across a post that was just trashing the Colin McCool series in one of the UF groups I frequent on Facebook. Now, I’ll be the first to say that I realize some people are going to hate my work (and that’s fine), but in this case I felt compelled to respond: 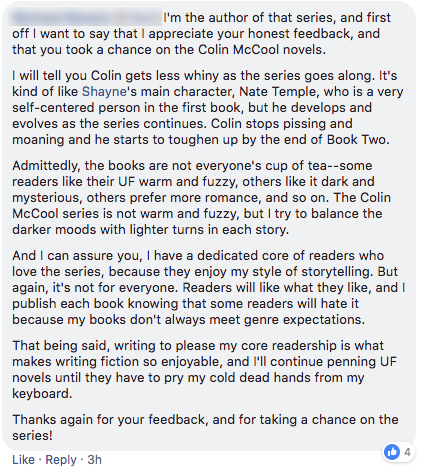 The reason why I bring this up is because I know there are a lot of aspiring writers who read this blog. And, one of the most difficult things new authors deal with is rejection—both in the form of actual rejection letters from agents and publishers, and the always-inevitable negative reader reviews.

Believe me, I get it. When you spend weeks, months, or in some cases years pouring your heart and soul into your writing, only to have it rejected (sometimes rudely) by others, it can be incredibly discouraging.

Unfortunately, this sometimes causes aspiring writers to lose confidence in the quality of their work and give up.

But I’m here to tell you, quitting is ALWAYS a mistake. Here’s why…

First and foremost, writing is a learned skill, and guess what? That skill will improve the longer you do it.

The truth is, every writer starts off penning clunkers, because that’s just part of the process. So, if you give up early in the game, you’ll never reach your full potential as a writer.

(If Dalton says it, you’d better believe it).

Thus, the opinions of most people aren’t worth heeding.

When I was a panelist at Boston Fantasy Fest earlier this year, I told the audience that I start every new novel secure in the knowledge that some readers are going to hate it. But, I’m not writing for those people—I’m writing for the readers who love my style of storytelling.

So, if someone leaves a negative review for one of my books, big freaking deal. They’re not my target audience, anyway.

Finally, if you’re writing for the sole purpose of receiving accolades from others, you need to seriously reconsider your motivations for writing. I’m not one of those people who will tell you that writing is a “calling,” but I will say that it should make you happy to sit down at your keyboard and create.

In short, you should write to please yourself. Heck, I do that all the time. I write scenes and chapters to books and stories I know I’ll never finish, just because I have an itch or I need to flesh out a character. To me, that’s fun. I don’t make a dime off it, but it helps my process, and oftentimes I enjoy those writing sessions more than when I’m working on a novel.

Ahem. I’ll get off my soapbox now and get back to the title of this segment—namely, how to respond when people are trashing your work.

And then, when you’re done, leave it. Speak your piece, and move on. Do not get drawn into long discussions (these can often degenerate into arguments—bad move), and don’t dwell on what that person said (unless it was useful advice).

That’s my two cents on how to deal with criticism as a writer. If you’re an aspiring writer who is struggling in this area, I hope it helps!

Now, For This Week’s Smoking Deal…

Described as American Gods meets Infinity War, True Blood meets The Talisman, and Supernatural meets The Lord of the Rings, Paternus combines myths from around the world in a modern story of action and intrigue that is “urban fantasy on the surface, but so much more at its core!”

Even myths have legends. And not all legends are myth. When a local hospital is attacked by strange and frightening men, Fiona Patterson and Zeke Prisco save a catatonic old man named Peter–and find themselves running for their lives with creatures beyond imagination hounding their every step.

With nowhere else to turn, they seek out Fi’s enigmatic Uncle Edgar. But the more their questions are answered, the more they discover that nothing is what it seems–not Peter, not Edgar, perhaps not even themselves.

The gods and monsters, heroes and villains of lore–they’re real. And now they’ve come out of hiding to hunt their own. In order to survive, Fi and Zeke must join up with powerful allies against an ancient evil that’s been known by many names and feared by all. The final battle of the world’s oldest war has begun.