The following is an interview I recently did for the Metro Atlanta Geeks group on Facebook. It’s a closed group, thus I figured I’d share the interview Q&A here so you can enjoy even more of my self-involved blathering. ~MDM 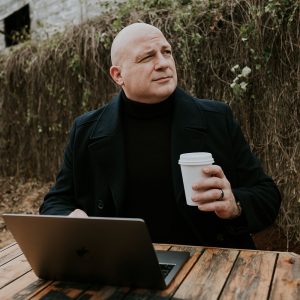 Q: You have a fairly extensive bio on your website. What about writing drew you to the craft?

A: My mother had a degree in English, and she made sure I was bitten by the reading bug at an early age. I remember being about four years old and sitting on our front porch with a stack of Little Golden Books, which she’d get me every time we went to the store. By the time I was nine, I had read works like Homer’s Odyssey and The Iliad, and then I discovered Asimov, Bradbury, and Tolkien.

It was a natural evolution from there to start writing, but my early efforts frustrated me greatly. Intellectual pursuits came easily to me. When I struggled to write compelling and coherent fiction, I became discouraged and set it aside for years (save for a period during my teen years when I wrote a lot of really horrible angsty poetry).

I only picked the writing habit up again in my early thirties, after penning a series of non-fiction books that launched my second career as a consultant. My wife bought me a Kindle for Christmas, and I downloaded a ton of indie novels because they were cheap and relatively plentiful on the platform. After hearing me complain about the quality of indie novels for the millionth time, my wife said something like, “If you think you can do better, then write one yourself.”

So, I started studying the craft in earnest. I bought books on writing fiction, took college courses and online classes, and turned my non-fiction writing practice into a daily fiction writing habit. Again, I sucked, and I couldn’t finish anything I started (“stuck in the muddle,” as it were). It wasn’t until I read Plot and Structure by James Scott Bell that things clicked for me; then I was off to the races.

Q: In your Colin McCool series, you delve pretty deeply into Celtic traditions and histories. From Fionn mac Cumhaill and the fianna, Cú Chulainn and his “beast”… Where were you originally exposed to this and what made you want to write about it?

A: Greek epics and tragedies weren’t the only things I read when I was a kid. I devoured anything myth-related that I could get my hands on, and that fascination lasted well into my teen years. When I set out to write my first novel, I initially wanted to write YA fiction, and I thought a book about a teen who hunts monsters would be a hoot.

That somehow morphed into Colin McCool and the Vampire Dwarf, which would later become the catalyst for the Colin McCool urban fantasy series for adults. Incidentally, I took that book off the market a few years back. My editor and I gave it a badly needed overhaul, and then I republished it as Druid Blood, which is now the first prequel to the Colin McCool series.

Q: I just finished Druid Mystic over the weekend, after having binged the entire series of books since early May. Colin’s story obviously isn’t complete. Is there an end in mind, or do you intend for it to go as long as you have inspiration?

A: I write Colin’s series in tetralogies, so obviously, there are at least two more books on the way. Currently, I’m working furiously on Book 11, Druid Arcane, and then I intend to work on one of my spinoff series before I start Book 12. However, Colin’s story won’t end there. I don’t want to give too much away, but I intend to continue his series by taking him back to the Hellpocalypse, and perhaps to other, equally exciting settings.

Q: In addition to the Celtic lore in the Junkyard Druid novels, you also have a character who is shall we say connected to the Maori Pantheon. For me at least, this is a fresh idea in the genre. What inspired this choice?

A: I saw The Dead Lands (the movie, not the TV series) and became fascinated with Maori warrior culture. That resulted in discovering that there weren’t that many depictions of Maori culture (specifically the warrior culture) in fantasy fiction. Naturally, I was surprised, because I thought a Maori warrior would make for an excellent urban fantasy character.

At the time, I didn’t feel comfortable writing a major character who was Maori, but I couldn’t resist adding a supporting character in the first Colin McCool novel. Thus, Hemi was born. He’s a lot like me in that he’s torn between two very different cultures, and Hemi doesn’t feel at home in either. I honestly felt that was the only way I could write that character in an honest manner, as I am obviously not Maori, nor am I an expert on the culture.

And if you’re wondering, yes, I did get a lot of help researching pretty much everything Maori, including the modern vernacular, their martial art, bits of language (which is beautiful and very nuanced), mythology, and so on. Jared Wihongi helped me a great deal with understanding mau rakau, which is the Maori martial art Hemi practices, and Tyrell Gemmell assisted me with Hemi’s dialogue and fact-checking various aspects of Maori culture and mythology.

What’s interesting is that I met Tyrell at The Polynesian Cultural Center in Hawaii while on vacation. Tyrell worked there for many years, and he’s also a practitioner of mau rakau. I went there to research Maori culture, and he was kind enough to answer my questions after a presentation. Tyrell was eager to assist me with understanding his culture, so he became my research assistant.

As it turns out, his mother teaches conversational Maori, so Tyrell was able to field questions to her that we couldn’t answer on our own. That was a tremendous help, absolutely invaluable for my research. I couldn’t have written Going Under (Hemi’s story in my Blood Ties short story collection) without their input. Any errors are my own, obviously, but hopefully, I got most of it right.

Q: What made you decide to indie publish?

A: Simply put, money, and control. I knew from my experience in self-publishing my non-fiction titles that I’d keep more royalties and have much more control over my works if I went the indie route. In hindsight, it was the right choice; I have friends who are trad-pubbed, and honestly, I don’t think I could do it.

Traditional publishers invest less money and fewer resources into new authors each year. Meanwhile, established authors get a bigger slice of whatever advances are available as time goes on. With the financial hit that traditional publishing is taking due to the pandemic, it stands to reason that the aforementioned trend will continue.

As for whether I’ll ever go trad-pub, that remains to be seen. I think the only way I’d ever consider a publishing deal is if they offered me a considerable advance, and I don’t see that happening any time soon. So, for now, the indie life is the life for me.

Q: You noted in your blog that it took a year to learn the ins and outs of indie publishing. Where would you recommend someone to start that learning process?

A: Derek Murphy wrote an excellent primer on the indie-pub biz titled Guerrilla Publishing. I think that book would be a good start for any author who is considering the self-publishing route.

Additionally, one key to success as an indie author is to avoid common pitfalls:

I could go on and on, but I think you get the point.

Another key to success as an indie author is to treat it like a business. I’ve been self-employed for much of my adult life, so that part came easy to me. But for many authors, it does not. If you’re of that ilk, you’ll need to work to overcome that hurdle, because it is a business and you need to be business savvy if you want a lasting career as an independent author.

Finally, study your craft. There’s a school of thought that says you should crank out a bunch of books fast, and success will follow. Even if that were true, would you want to be that author?

Personally, I’d rather attract a more discerning reader, because picky readers tend to be very loyal to authors they like. If you want to have a career that lasts, quality counts.

Q: Do you ever do appearances for conventions and such?

A: Rarely. It’s not so much that I’m a recluse; rather, I write full-time, plus I run a consulting business, and I teach martial arts. Between that and family life, I stay pretty busy. I think eventually, my readership will force me out of my office and into the great wide world of cons. Perhaps after things get back to some semblance of normal, you’ll see me at a convention near you.

Q: Finally, what is the worst thing to happen to you as a writer and what did you do to overcome it?

A: Honestly, the worst thing that’s happened to me is to have my personal life reflect difficult situations in my current WiP. Believe me when I say that it makes it very difficult to write when your work hits so close to home. I’m dealing with that right now, and I’m just having to write through it, which is pretty much all you can do.

But, that’s part of being an author. To write honest stories, you have to invest a great deal of yourself in your work. Can it be emotionally taxing? Absolutely. Yet, it’s also highly rewarding when you create a story that rings true with your audience.