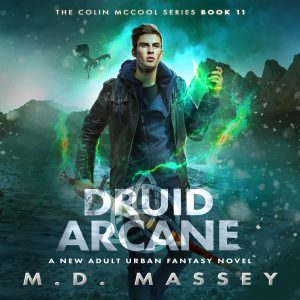 Earlier today I was checking out the most recent reviews for Druid Arcane, like I always do with new releases, and I noticed a 3-star review sticking out like a sore thumb amidst all the five star reviews on the page.

To be honest, a three-star review doesn’t really bother me. Of course, I don’t like getting them, because they bring your review rating average down, which can hurt book sales. But I don’t mind reading them because the comments are usually gold.

Thankfully, the reviews for Book 11 have been overwhelmingly positive to this point, and readers have been going bonkers over this latest entry in the Colin McCool series. So, I was curious to know why the reader gave the book a mediocre review.

Lo and behold, the reason why the reader gave the book three stars was not due to the quality of the novel, but personal preference. This reader said he enjoyed the earlier stories when Belladonna, Hemi, and Fallyn made regular appearances.

That’s legitimate. It’s not necessarily a legitimate gripe with regards to story quality, but it is a legitimate reason for a reader to dislike a later entry in a series. People like things that are familiar, and they especially like for things to stay the same—I get that.

However, keeping things the same does not make for good fiction. When characters don’t evolve over the course of a story, they seem one-dimensional. And they are, because static characters are nothing more than cardboard cutouts used to fill a narrative.

Likewise, plopping a fully-realized and self-actualized character into a story as the protagonist makes for equally dull and uninspiring fiction. Nothing is more boring than a Mary Sue or Marty Stu character, because they never have to earn or learn anything to advance toward their intended goal.

In other words, stagnant characters suck, and perfect characters suck even more. That’s why Colin started off as a bumbling, underachieving, and dare I say whiny teenage kid. He needed space to grow as a character, and I gave him that.

Since I planned the Junkyard Druid novels as a twelve-book series (I will write more, but that’s what I initially planned), Colin goes through micro and macro characters arcs. He experiences a minor character arc in each novel, and he’s also going through a major character arc over the entire series.

That’s what brings a character to life—they change. If you’re in the eleventh book in a series and your main character is still doing the same stuff they did in Book 1, what’s the point? All good characters evolve… which brings me to my next reason for mixing things up.

World Building Tip: The Only Consistency Is Entropy

As a writer and reader, I prefer dynamic worlds. Meaning, I like worlds that change. Good world-building should give the impression that things are going on behind the scenes and in other places at all times. One way to create that illusion for the reader is to allow the world to change.

And if you think about it, in real life nothing ever stays the same. Sure, certain things are cyclical, like the economy, fashion trends, and William Shatner’s career. But for the most part, the only thing you can count on is that things are going to change.

That’s why I’ve consistently sought to bring something new to each novel in Colin’s series. While I could have simply served up the same old meal on a new plate with each additional entry to the series, instead I changed the settings, supporting characters, and villains in each and every book.

Other Reasons For Changing Things Up

And, there are other reasons for changing the tried and true. Prolific authors often mix things up by writing in different genres, or bouncing back and forth between series. There are legitimate reasons why said authors do this:

I’m no different. And being an INTJ, I require more variety in my professional pursuits than the average person. Since I’m writing a single series in marathon fashion, I need to change things up with each novel so I don’t get bored and drop the series.

Other authors might be content to crank out the same novel dressed up in a new plot with each new entry in their series. And that’s fine for them—it’s a hell of a lot easier to produce novels quickly when you use the same formula each time.

But, that’s not good enough for me. And while I know some readers might wish that I’d bring back the same old supporting characters and settings in every new book in Colin’s series, my goal is to surprise you with every new book.

For those who enjoy being surprised, hopefully I’ve done that with Druid Arcane. And for those who want to see old characters and sidekicks again, don’t worry—Book 12 will bring them all back for the grand finale of Colin’s initial macro story arc. Let’s just hope Colin doesn’t blow his world up in the process…