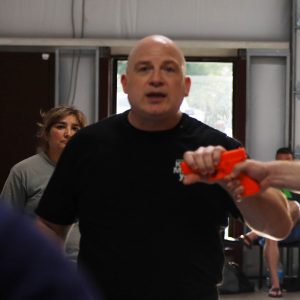 It’s time for another of my very infrequent blog posts, which I usually write so my readers don’t think I’m just goofing off and ignoring them. Or ignoring the next novel, short story collection, audiobook, or whatever else I have on my production schedule.

And while I do love nothing more than playing video games all day, going to the movie theater at 11 am (and enjoying a beer, while I’m at it—or even better, a nip of whiskey snuck in via pocket flask), and just generally chillin’ like a villain, that’s not what I’ve been doing this year.

Nope. Back in January, I opened another bricks and mortar business.

I should know better, really I should. I’ve been self-employed since my early twenties, and I know damned good and well how much work it takes to run a successful small business. And that amount of work is “a lot.”

But apparently, I get bored when I have too much leisure time on my hands. So I opened another martial arts studio—my fourth commercial studio, and the sixth I’ve owned or part-owned.

Boy, did that turn out to be a mistake.

Namely, the god-awful amount of time it takes to keep such a commercial venture afloat. Time spent doing marketing, recruiting, and admin work—the day-to-day stuff that I no longer have the time or desire to do.

An employee was supposed to be handling most of those tasks, but it didn’t work out that way once the business was up and running. And unfortunately, taking on all that extra work forced me to back off my normal writing and publishing schedule.

The good news is, I’m shutting the dojo down and going back to teaching part-time and writing full-time at the end of the year. Meanwhile, I intend to spend the holidays recuperating and regrouping from complete and utter burnout, thereby renewing my muse so I can get back on my usual writing schedule with a passion next year.

As for what I have planned before the Christmas holidays, I’ll likely spend the first three weeks of December finishing another Junkyard Druid short story collection. After that, I’ll be plotting two new World Beneath spinoff series, as well as the last three novels in the Colin McCool series.

And I intend to drink a lot of egg nog. Lots and lots of egg nog, made with good bourbon instead of the kerosene-flavored egg slurry they sell this time of year at the liquor store.

Then it’ll be back to my same old writing schedule in 2020.