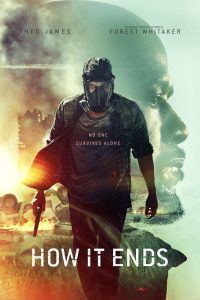 The ironically-titled How It Ends is a post-apocalyptic thriller starring Theo James, Forrest Whitaker, Grace Dove, and Kat Graham. Like many of the other Netflix original films the streaming service has released this year, it features an above-average production value and a perfectly competent cast. Sadly, it ultimately fails to deliver as a theater-worthy movie due to weak character dialogue, implausible scenarios, and a bizarre plot twist that takes the film in a decidedly weird direction in the final act.

In the first few minutes of the film we find Will (James) shacking up with Samantha (Graham), and soon the two discover they’re expecting a baby boy. Will decides he needs to ask Tom, Samantha’s father (played by Forrest Whitaker), for her hand in marriage. Will conveniently has a business trip scheduled in Chicago (where Samantha’s parents live), so he drops in for a dinner date with her folks in order to get his future father-in-law’s blessing.

Unfortunately, Tom is a glowering, abrasive, and distant sort of man, an ex-military type (of course—screenwriters seem to think all vets suffer from borderline personality disorder) who for some strange reason is not okay with the fact that his daughter’s live-in boyfriend is a successful young attorney (who incidentally has been dating her for six years, which is apparently not long enough to come to grips with the fact that your daughter is having premarital sex). One can only suspect that Samantha’s dad would rather she had hooked up with some Marine Corp boot, but I digress…

At any rate, Dad disapproves of Will, Will disapproves of Dad, and this sets up a ton of predictable tension between the two characters. But before Will can storm off back to Seattle (sans Tom’s blessing, natch) a vaguely-explained geoseismic event occurs just off the West coast, knocking out power and communications across the continental United States. Since all flights have been cancelled (the why of this is never explained either) Will heads back to Tom’s place, and you guessed it, we now have a post-apocalyptic road trip movie.

Did I mention that none of the precipitating events in the movie are ever explained? This leaves the viewer wondering throughout the entire movie: “Is it an EMP? Is it volcanoes? Earthquakes? Nuclear war? All of the above?” All we’re told is that shit got weird and Tom and Will need to rescue Samantha. Okay, whatever. By this point I just wanted the action to start.

And does it ever. Now, I’m not saying this is a great film, because it ends up being a pretty shitty film in the end, but the middle two-thirds is a fairly decent post-apocalyptic, grid down, SHTF survival tale. Our modern-day survivalist odd couple see a lot of action together, things go sideways for them more than a few times, and during that roughly seventy-minutes of the film we get to see a fairly believable (okay, not that believable, but entertaining) depiction of what would happen if the grid went kaput.

Predictably, Tom and Will bond, Will gets over his gun and violence allergies, Tom stops being a dick occasionally, and they manage to cross almost half of the country without getting killed. Oh, and they team up with a Native American female mechanic named Ricki (Grace Dove) along the way, who (also predictably) gets some of the worst lines in the film. All-in-all it’s pretty standard end-of-the-world-as-we-know-it fodder, but it’s entertaining enough to pass the time if you’re into that stuff like I am.

I won’t spoil the entire plot for you, because if you like post-apocalyptic disaster movies and you have two hours to kill, you might want to spool this movie up. However, I will say that the last twenty minutes of the film completely negates any redemption the first ninety minutes earns. In fact, the writers could have left the last twenty minutes out while giving viewers a fairly satisfying ending, and in so doing saved the studio a bundle by cutting at least one useless character and a whole lot of needless filming and production.

Despite its shortcomings, How It Ends is a better than mediocre post-apocalyptic thriller. While it does stumble in places (and completely nosedives during the last twenty minutes—holy shit Brooks McLaren, what were you thinking?) I didn’t hate it. In fact, I mostly enjoyed the film… with the exception those painfully ineffectual final scenes.

Should you see it? I dunno. If you’re a prepper or someone with a military background, you’ll probably find it to be entertaining, yet you’ll likely be yelling at the screen through most of this flick. But if you just want some mindless entertainment and you’re the type who enjoys seeing the world burn, you should check it out. Just don’t expect to be wowed by the script, and if you end up hating that last twenty minutes, don’t say I didn’t warn you.