Once again it’s time to post a quick update on the books I am currently writing and publishing, so here’s this month’s blog post.

What I’m Currently Working On

I was supposed to have written and published Book 5 in the Colin McCool, Junkyard Druid series by now, but the flu had other ideas about what I should be doing with my time this month. So, instead of getting Druid Justice out by the end of the month, I spent two weeks battling this year’s strain of influenza A. Yay! 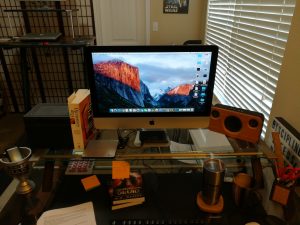 Anyway, I am back to my regular writing schedule. And, I am working on not just one but TWO novels. The first is obviously the next Colin McCool book, and the second is the first book in a sorta-secret project I’ve had planned for a while now. It’s a spin-off featuring a couple of popular characters from the Colin McCool series, and so far it’s turning out to be a lot of fun to write.

I’ve never written two novels at once before, so I decided that if I was going to do so I needed a workable, sustainable system for getting it done. What I’ve been doing is sitting at my writing desk and typing three scenes a day in the Colin McCool novel, the way I usually do. Then, I take a break before sitting down to dictate one scene in the other novel.

I prefer to either type or dictate each novel, but not both. The reason is that my prose is slightly different when I type versus when I dictate. Thus, the decision to type the Colin McCool novel and dictate the spin-off series. Typing is much slower, as any author who uses dictation will tell you. And that’s why many authors choose to dictate exclusively. I can dictate a scene in roughly half the time it takes me to type it. However, I tend to have a lot more typos with dictation, and that requires more editing, so it’s a trade-off.

Also, dictation is much less tiring than sitting at the keyboard for hours on end. I’ve always found that typing for hours on end really wears me out mentally. I believe it has something to do with the fact that you’re using your hands while you’re deep in concentration. I can dictate a few thousand words and still feel fresh after, but if I type a few thousand words at the keyboard, I just feel wrung out at the end.

Since I’m working on the spin-off novel at the “end” of my writing day (I get up early, so that’s early afternoon for me), I find it much less taxing to dictate that final scene of the day. In fact, it’s actually a nice change from sitting at the keyboard. So, I believe I’ll stick with this system until both of these novels are written, then I’ll reevaluate and see whether I want to keep that system going for the next few novels.

Honestly, there’s not much else going on. I’ve been working on some fun projects in my day job gig as a consultant, but I won’t share the details because it’s just not that exciting to anyone else. Suffice it to say that I’m engaging in activities that I enjoy because these activities require me to be creative, but it’s stuff that’s utterly boring to everyone else.

Most of you know I enjoy training martial arts; in fact, I was a professional instructor for many years. Well, lately I’ve been getting back into the Filipino martial arts, and I’ve been having a blast with it. One of my training partners comes by a few times a week, and we work drills and do a lot of focused sparring. It’s a great cardio workout and a lot of fun because it almost feels like sword fighting. I enjoy it a great deal.

Oh, and I haven’t replaced my American Bulldog yet. I think it’ll be a while before we have another pet in the Massey household. Losing Maggie was just too hard for everyone. But, I’m sure I’ll get puppy fever at some point, and come home with another dog… vexing my wife greatly, of course.

Anyway, that’s it for my update this month. Be sure to check out my Facebook page and follow me on Instagram if you want to keep up with me between blog posts!