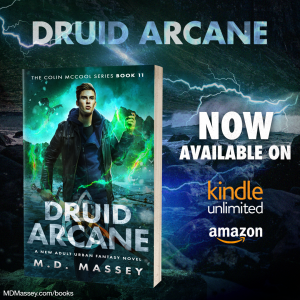 Wow… the reviews for Druid Arcane have been phenomenal! You really seemed to enjoy this installment in Colin’s story, which makes me happier than a butcher’s dog on bacon day. Thanks to everyone who left a five-star review, because seeing all those stars has made my day, every day since the book dropped.

Also, Amazon mixed up the sales pages between Book 12 and Book 11. Not only were the reviews and data mixed up between the two books, customers were getting sent to Book 11 when they clicked links for Book 12. The good people at Kindle Publishing tell me they’ve fixed the issue, but if you’re still having trouble getting the book, hit me up with a DM on my Facebook page to let me know.

Anyway, here’s what I’ve been up to lately…

I’m knee-deep in the first novel in Crowley’s series. He’s a blast to write, mostly because he doesn’t worry about annoying things like morals and ethics. He does have a heart, though, and you’ll get to see that when you read his series.

As for a release date, I can’t give an estimate until I finish his second book later this year. However, you can expect to see Book 1 in Crowley’s series about a month after Book 12 in Colin’s series releases.

I just read through J.L. Bourne’s Day By Day Armageddon series. After reading his latest, Trilobyte, I was itching for more of his work. It’s been a few years since I read DBDA, and it was just as good the fifth (?) time around. If you enjoy zompoc and haven’t read the series, I recommend it.

I’m currently re-watching season 2 of The Expanse, to refresh my memory before I watch season 3. Which, hopefully will happen before S2 of The Boys drops at the end of this month. Honestly, I’d forgotten how compelling The Expanse is as a series. The characters are fleshed out and unique, each with their own motivations, character flaws, and secrets, and the storylines make sense, at least as far as space opera can make sense. I for one am glad it got picked up by the ‘Zon.

For the last few days I’ve been enjoying the improved graphics in Return to Arkham City. The gameplay isn’t as challenging as it was the first time around, but it’s still a heck of a lot of fun to beat up bad guys using all of Batman’s toys and tricks. Speaking of which, expect a return of the original “bat-man-slash-bat-god” in Book 12 of the Colin McCool series…

That’s all for now. I’ll keep you posted on my progress as I continue to write Crowley’s series and Book 12 in Colin’s series. And if you haven’t grabbed Druid Arcane yet, what are you waiting for? Go snag a copy now while it’s still on sale for $2.99!